Students at Founders Classical Academy learn that education is good for its own sake, and the school strives to avoid the approach so common in K-12 education where achievement is pursued for the sake of achievement. Students are encouraged to seek honors but only when those honors are worth pursuing. They learn to be like the archer in the first pages of Aristotle’s Nicomachean Ethics, aiming high, but aiming for the good rather than the lucrative, the honorable, or the pleasant. The following lines from the Ethics, prominently displayed on the wall, provide students and teachers with daily guidance: 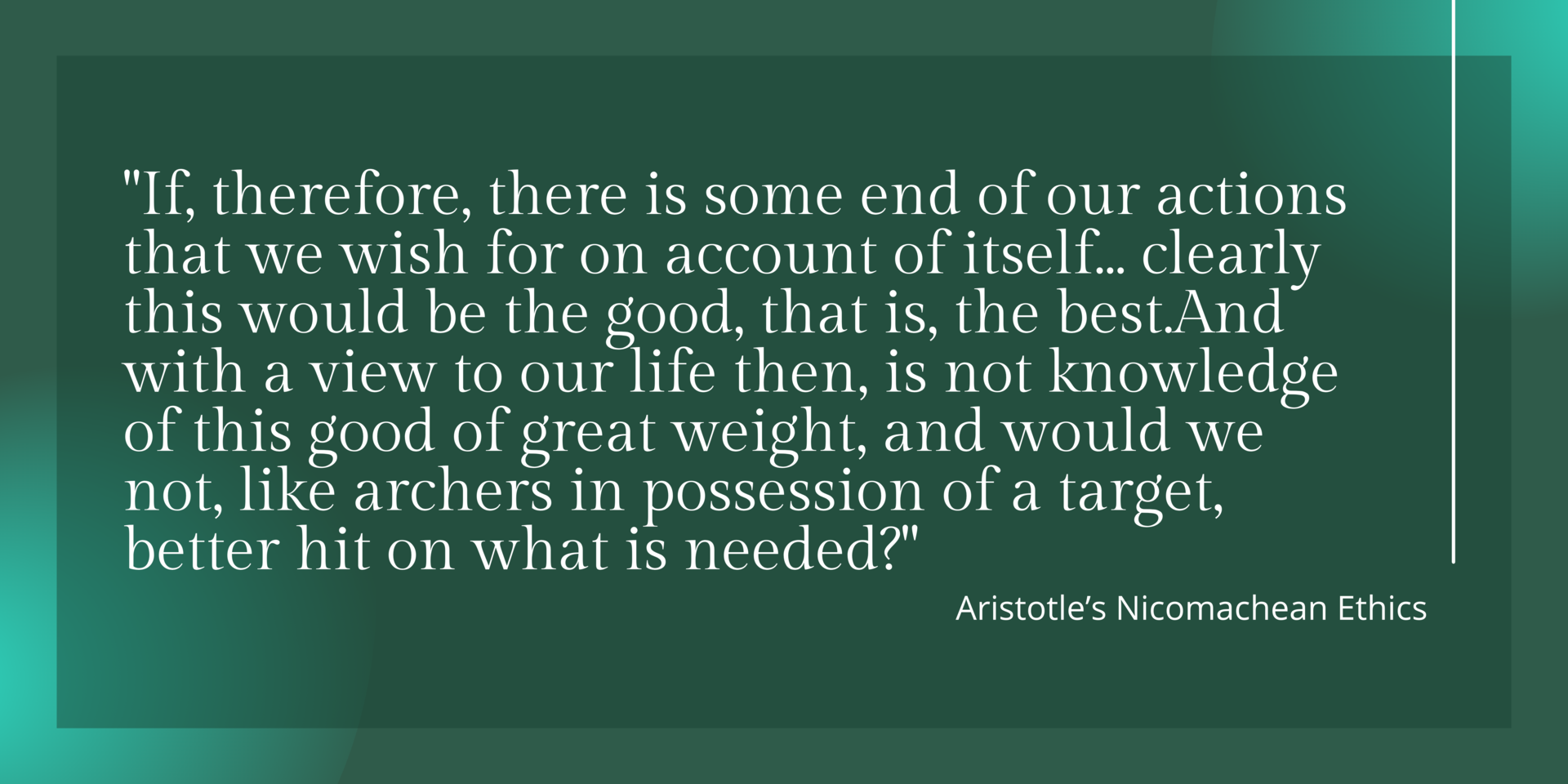 At Founders Classical Academy, education is good for its own sake and the things that students are learning are worth knowing regardless of the path they choose after graduation from high school. Our hope is that our students will learn that happiness is most attainable by those who pursue virtue.

Students at Founders Classical Academy pursue a moral and intellectual education and are expected to behave in accordance with the school's core virtues: courage, moderation, justice, friendship, responsibility, prudence, and wisdom. Each virtue is accompanied by an explanatory statement intended to help students understand the virtue and the ways in which its associated vices can take root in our characters. We talk about virtue in the same way in all grades because virtue is for all human beings, no matter their age.

The school's virtues are taken from Aristotle’s Nicomachean Ethics, the first book about virtue and human happiness. The virtues are taught in ascending order and students are encouraged to practice the virtues with the understanding that the higher virtues will become easier as the lower virtues become habits. This is one lesson of the Nicomachean Ethics--that intellectual virtue is higher than moral virtue but depends upon it. To live the good life a person must cultivate good character as a foundation for the intellectual virtues.

At Founders Classical Academy, we teach responsible citizenship. We believe that government should operate by the consent of the governed, and that a thoughtful approach to citizenship is therefore an essential component of patriotism. We believe that as responsible citizens we must improve the things in our regime that need improvement and preserve the things that are good, and that an understanding of the American founding is essential for an understanding of what is good for the country. Our students learn about America by studying its founding, and asking themselves what in our origins was good and true.

Our students learn that some of the principles of our political order have their origin in ancient civilizations. We recognize and celebrate the great debt that we owe to the ancient Greeks and Romans, and in studying these ancient peoples we are reminded that though history provides us with both good and bad examples, we are fortunate that the good examples have been preserved for us.

Our younger students prepare for citizenship by memorizing speeches and writings from the American founding and from Abraham Lincoln. In the Upper School students begin to engage in seminar discussions during class, and they learn how to put complicated ideas into words, and to disagree with each other in a civil manner. In Rhetoric, they practice the art of compelling speaking, and they learn to recognize clever arguments that can lead us away from the truth. The high school course sequence concludes with courses in both Government and Economics, and together these give students an understanding of the relationship between the founding-era approach to political problems and our approach today.

We expect our students to understand that they are part of a community and to remember that they have obligations to one another because they are with us. We believe that by practicing being good members of our small regime they will be prepared for citizenship in our country when they leave us.

Honoring Excellence and Those Who Came Before Us

Student Leadership through the House System

To cultivate the development of self-government, organization and execution, and leadership, the entire student body is divided into one of six houses (Beethoven, Da Vinci, Euclid, Herodotus, Newton, and Shakespeare) for their 7th-12th grade years. Each house, led by a Mentor Teacher, competes against the others in a series of academic and athletic competitions. Throughout the year, a student earns points for his or her house when recognized for distinction in the classroom, on the athletic field, or in words and deeds. Each house is also responsible for planning a school event and undertaking a community service project. Houses are led by a head boy and a head girl, chosen by their mentor, and by student representatives for each grade, elected by their peers.

Each Upper School house works together to perform acts of service for the school and our local community, and our highest performing students often spend time after school providing tutoring for their younger schoolmates.